I’m Saro’s iPhone. Do you know something? (Hushy voice) These days, he spends more time with 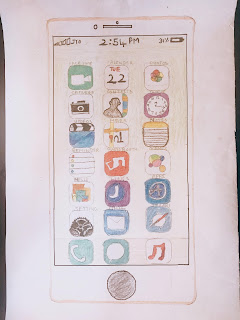 me than with his wife.

Saro told me on Friday night that he wanted to get up early. I promptly woke him up at 6 o’clock. It was a beautiful Saturday morning. He decided to go to the beach to jog and he took me along with him. When we went to the parking lot, he noticed that the car had a flat tyre. He got very disappointed. I told him “Hola… Say Ola.. Let’s book a cab and go”. I quickly booked a Prime Sedan for both of us.

We reached Marina beach by 7 am. Saro was still thinking about the flat tire.. and hadn’t recovered from the disappointment. I wanted to cheer him up and started singing some beautiful A.R. Rahman songs. I soaked him with Rahman’s melodies. When he finished jogging, I told him “Saro! Congratulations… You burnt 300 calories today”. He was very thrilled. He asked me to take a picture … He stood by the waves on one side and the rising sun on the other side. I told him “Say Cheese!” and clicked a picture for him.

We again booked a Ola cab, to get back home. On the way back, there was an accident and the road was completely blocked with heavy traffic. I told the Ola driver “There is another route via Cathedral road. Let’s just take that”. The driver just followed my orders, like a servant following the master.

When we reached home, Saro was very hungry. He asked me “Siri! Can I get something to eat?”. I immediately said, “I have ordered something for you from Madras Curry Cup. It will reach in 15 mins”. Promptly, in 15 mins, we heard the calling bell ringing. There was a guy from Swiggy delivering the hot meal. Saro didn’t have cash to give to him. I jumped in and said “Hey Saro… PayTM Karo”.

I've almost become Saro's half girl friend these days. Saro spent the rest of the day with me, by reading Chetan Bhagat’s “Half Girl Friend” book in a Kindle app.

Dear friends… I’m the superfast smartphone. Steve Jobs gave me my identity by combining a GPS, a Phone, a Camera and a Music Player into one device. Steve topped me with a number of applications and called me the iPhone. I’m one of the best in class smartphones. I run on a network called 4G. You can use me to watch High definition movies and fast paced games.

Are you curious to know about my ancestors?

This is my mom, the 3G phone. She was born in the year 2001. She was 10 times
slower than me. She can be used only to check emails and browse the web.

This is my grandma, the 2G phone. She was born in 1991. She isn’t multifaceted like me. On top of it, she is dead slow and very boring. She can be used for just making calls and sending text messages. Her footprints are erased in all developed nations. Countries like India, still have some traces of my Grandma lingering around.

My great great grandma, the first handheld cellular phone was invented by John F. Mitchell and Martin Cooper of Motorola in 1973. She weighed 2 Kgs. She was like Kushboo … while I’m like Amy Jackson. She was pricey. She was sold for a whopping $4000. With that kind of money, today, you can buy may be 10 smartphones like me.

Today, smartphones like me are less of a phone and more of a distraction. We crave for attention... through the constant dings and notifications. We know more about you than your own parents or spouse. We know exactly where you are going, who you are meeting and what you are purchasing.

Fellow Toastmasters and guests, how many of you have seen the movie “The Mummy”? Do you remember the “Sand Storm” segment in that movie? The fierce sandstorm engulfs the hero’s aircraft. Similarly, smartphones like us are sandstorms. We engulfed many devices like GPS, Music Players and Cameras. We engulfed phone booths, taxi operators and post offices. Now we are gearing up to engulf you and your personal time with family and friends. We attract you like magnets … We addict you like drugs… We affect you like cancer…

This is your final call

Stop texting people ... Start meeting them
Stop buying online ... Start walking to the shop
Stop playing on the mobile ... Start playing with the kids in your home

My boy friend has decided to break up with me... TMOD... Have you?

It is easy to write a speech, but it is very hard to make it humorous. If you are wondering, "How to make a speech humorous"... don't worry, this article will give you tips to induce humor in the speeches and get a few (if not more!) laughs. There are a number of techniques available to inject humor in the speeches. I am not a humorist either and the wisdom shared in this article is a collection of information sourced from various educational sessions, blogs and podcasts.

You can use the actual meaning of some words, to trigger humor.

The easiest way to make people laugh is to use self-deprecating humor. Never attempt to make fun of others. Also, stay away from taboo topics such as sex, religion and politics. Using these topics will make you and your speech look cheap.

Exaggeration enables audience to visualize .. and that triggers humor immediately.

This is the most (ab)used form of humor. You can use word play like spices on the soup, and not as the main ingredient.

Quotes = Inspiration.  Over usage of quotes have irritated people more than inspiring them. That provides you an opportunity to twist some quotes, to trigger humor.

This is the most effective technique to trigger humor. When you setup the situation, you are actually making the audience to think in a particular direction.. and immediately, you pause and surprise them with the punch.

Rule of Three is very similar to the setup / pause / punch technique, but will help you to do the "setup" in a more systematic manner.
If you know of other techniques, please post here as a comment.

I’m a toastmaster…
I participate in meetings, but don’t precipitate
I’m always prepared, so I’m not afraid
I help others to perform, so that their skills can reform
I give everyone a pat, that’s the best way to get them to act
I’m a toastmaster …
I remain positive, even if my blood group is negative
I treat everyone fair, they being a guest or a DTM doesn’t matter
I’m ready to serve the club, because my heart says so with every single lub-tub
I’ll follow the rules, as it helps the club to reach its goals.
I’m a toastmaster !!!